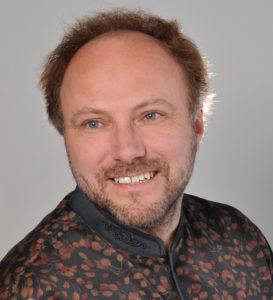 He continued vocal studies in Italy after he won the Italian Government Scholarship (University of Perugia, Accademia Chigiana of Siena and Fiesole Academy). Among his teachers were: Giorgio Favaretto, Lajos Kozma, Fedora Barbieri, Giancarlo Montanaro, Claudio Desderi and the legendary Rolando Panerai. For a few years at the beginning he was a member of the ensemble of the Teatro Comunale – Maggio Musicale Fiorentino Opera House in Florence.

At the University of Florence, his adopted hometown, he studied History of Music and Literature. He wrote his Doctorate (PhD) on Francesco Paolo Tosti and Italian „Romanza da Salotto Italiana”.

He sang at the festivals such as Maggio Musicale Fiorentino, Cantiere Internazionale d”Arte di Montepulciano, Puccini Festival Torre del Lago, Festival della Valle d’Itria, St. Petersburg Festival, Kissinger Sommer and Monte Carlo Festival. He performed in opera houses in Poland, Germany, France, Spain, Holland, Belgium, Luxembourg, Oman, Qatar and China. In Siena, Florence, Naples and Milan he sang Figaro in „Le nozze di Figaro” and in „Il barbiere di Siviglia”. He gave Leporello („Don Giovanni”) in Rome and Florence, Salieri in „Mozart and Salieri” and Scarpia in „Tosca”. He sang at the Italian world premiere of „Moses und Aron” with Zubin Mehta and he was the first italian Eddy in Mark Anthony Turnage’s opera „Greek” in Montepulciano, a project that was realized by Hans Werner Henze also as a film for RAI. He performed in the first italian performance of „Die Frau ohne Schatten” at the Maggio Fiorentino. He was Donner in „Das Rheingold” at the 100th anniversary of the legendary Forest Opera in Sopot/Poland, Raphael in the „Die Schöpfung” in Martina Franca, the bass in the „Coronation Mass” in Ravenna, the „Nelson Mass” and in Rossini’s „Petite Messe Solennelle” at the Monte Carlo Musique Sacrée Festival, as well as at the Kissinger Sommer Festival and in the Frauenkirche in Dresden during the Dresdner Musikfestspiele.

His repertoire ranges from Bach to Haydn and Beethoven, from Mozart, Donizetti, Rimsky-Korsakov to Tschaikovsky, Verdi, Richard Strauss, Szymanowski and Penderecki.

Daniel Kotlinski has been a vocal professor for 16 years in Gdańsk, Poland and is considered a specialist of the Italian school of Belcanto (he got his professor’s habilitation in 2013). He was the artistic director of the non profit “Romualdo Del Bianco” Foundation for young artists and first general manager – sovrintendente of the “Auditorium al Duomo” the new concert hall in the heart of Florence. With his Polish foundation „Syrinx-Academy”, he helped young very gifted musicians and singers, buying them new instruments and offering possibilities to study in Europe and America, to take part in competitions, seminars, etc.

For his activity he was awarded with special mentions, prizes and medals in Poland, Italy, Romania and in Oman.

Between 2011 and 2016 Daniel Kotlinski sang in Florence, Parma, St. Petersburg, Mexico City (XXVIII Festival de México), Bad Kissingen (Kissinger Sommer Festival), Beijing (NCPA Philharmonic Orchestra season closing gala with Ning Feng violinist) and as a first Polish artist sang at the new Royal Opera House Muscat, Oman with Simone Kermes and Pretty Yende (Academy Orchestra of Teatro alla Scala, Milan). He performed in gala concerts for the annniversary, of the created by Lorin Maazel, Qatar National Philharmonic in Doha (with tenor Dmitry Korchak), he sang „Ein deutsches Requiem” by Brahms in Berlin, „Anna Bolena by Donizetti at the Gasteig Philharmonie in Munich and at the Musikverein in Vienna with Edita Gruberova, for the 45-years career anniversary of the soprano. He was Jacopo Loredano in „I due Foscari” in Munich with Simone Kermes, Paolo Gavanelli and Arturo Chacon Cruz; conducted by Massimiliano Murrali and Pere Laurence in „Romeo et Juliette“ – Symphonie dramatique Op.17 by Hector Berlioz at the Gulbenkian Festival in Lisboa, conducted by Lawrence Foster. He sang with the Salzburger Hofmusik conducted by Wolfgang Brunner, again at the Beijing NCPA Festival, Handel & Mozart. In March 2014 Daniel Kotlinski has performed at the Opéra de Marseille Le Silo Concert Hall the 9th Symphony of Ludwig van Beethoven conducted by Lawrence Foster with Ricarda Merbeth soprano and tenor Donald Litaker.

Daniel Kotlinski performed in Rudolfinum Prague, „Die Schöpfung” – (Raphael and Adam) with Czech Philharmonic and Chorus conducted by Jiri Belohlavek (World live broadcasted by Czech Radio.) At the the Luzern Festival Zaubersee he was Salieri in „Mozart and Salieri“ by Rimsky-Korsakov conducted by Matthias Bamert and recorded by the Radio Svizzera Classica in the concert shared with Daniil Trifonov.

At the 28. Kissinger Sommer Festival he was the „Artist in residence“ together with the tenor Dmitry Korchak, the title was awarded for the first time in the festivals history.

Daniel Kotlinski was Dulcamara in „L’Elisir d’Amore“ by Gaetano Donizetti live recorded by Bayerischer Rundfunk Munich (with Dmitry Korchak as Nemorino and Ludmilla Bauerfeldt as Adina). He sang an opera recital gala in Liechtenstein with the National Orchestra of Liechtenstein, and a concert with soprano Julia Novikova at the Moritzburg Meisterkonzerte. In January and February 2015 he did concerts and masterclasses in Florence, Pescara and Salzburg Mozarteum accompanied by Prof. Siegfried Mauser. At Easter 2015 he sang a recital at the Moscow International Performing Arts Center. He again performed with Czech Philharmonic and Chorus, „Missa Solemnis” by Beethoven conducted by Jiri Belohlavek, together with Genia Kuehmeier, Marianne Crebassa and Arturo Chacon-Cruz. At the Opéra de Marseille Daniel Kotlinski sang under conductor Yaron Traub in „Des Knaben Wunderhorn” by G. Mahler.

At the Royal Opera House Muscat, he sang in the gala of 30 years anniversary of the ROSO – Royal Oman Symphony Orchestra, the World Premiere of „Bridge to Oman” by Bernd Redmann, conducted by Nicola Paszkowski. The concert was live broadcasted by Oman Television and recorded for CD by Fone’.